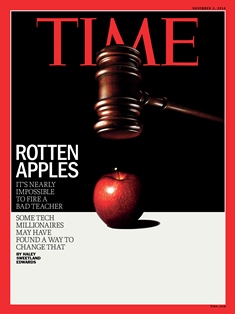 One rotten apple at Time magazine—specifically, the cover of an upcoming issue about teacher tenure—is generating lots of anger and activism among AFT members and our friends and allies.

The cover for an issue set to hit newsstands on Nov. 3, which reads, in part, "Rotten Apples: It's Nearly Impossible to Fire a Bad Teacher," shows a gavel about to smash an apple. "When I saw this today, I felt sick," AFT President Randi Weingarten said in an email message to AFT activists. "This Time cover isn't trying to foster a serious dialogue about solutions our schools need—it's intentionally creating controversy to sell more copies."

Weingarten's email also included links to a petition urging educators to ask Time to apologize for the misleading and inflammatory cover. The message clearly struck a nerve, with thousands of people signing the petition, sharing it on social media, tweeting at Time, and generally expressing their displeasure with the magazine. In less than 24 hours, more than 25,000 had signed the petition.

#TIMEfail get your facts straight Time Magazine. Using your upcoming cover to bash teachers has you losing this customer for a lifetime!

And the cover doesn't even reflect Time's own reporting. The article itself looks at the wealthy sponsors of the efforts to strip teachers of due process protections. And while it looks critically at tenure, it also questions the testing industry's connections to Silicon Valley and the motives of these players.

"But rather than use the cover to put the spotlight on the people using their wealth to change education policy," Weingarten says, "Time's editors decided to sensationalize the topic and blame the educators who dedicate their lives to serving students."

Why is @TIME attacking teachers? This misleading cover is more about sales than truth. Demand an apology! http://t.co/Z9qd15O9RM #TIMEfail