For two years, graduate employees at Georgetown University have been organizing, persistently working toward official recognition as the Georgetown Alliance of Graduate Employees. On April 2, the university finally agreed to allow them to vote on whether they want a union and promised that, if they win the vote, they’ll have dispute resolution, collective bargaining and other measures that will give them more of a voice on campus.

That means Georgetown’s graduate workers will have more say in essential, everyday matters—such as ensuring they have a living wage delivered in a timely manner, a manageable teaching workload for teaching assistants, access to meaningful healthcare, policies that promote equity and inclusion, support for international graduate employees, protection against sexual harassment and more. 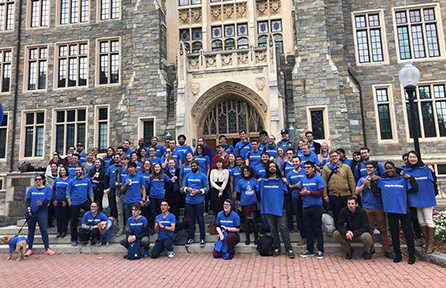 The agreement to approve a union, should the majority of graduate employees vote for one, was made between the university and GAGE, outside the National Labor Relations Board that normally oversees the approval—or rejection—of a new union. It is a landmark agreement because it paves the way for other private university graduate employees to avoid the NLRB, where the majority of members are understood to be against graduate unions at private colleges. The election will be overseen by a neutral third party, the American Arbitration Association.

“This negotiation took awhile, and our members were always ready to show our strength at every turn,” said Kevin Carriere, a graduate employee in the psychology department. Indeed, grad workers exerted considerable pressure on the administration, joining with community allies like students, faculty and alumni to rally, circulate petitions, distribute fliers and leverage social media to promote their cause.

“As a graduate worker, I’m excited about continuing to build GAGE’s support among all segments of the Georgetown community and negotiating a meaningful contract ensuring just labor rights for myself and my peers,” said Sarah Gilkes, a graduate employee in security studies. “I’m so proud to be part of GAGE and to have played a role in demonstrating, yet again, that collective organizing works.”

Another graduate worker, Manasa Suresh, an international student enrolled in the microbiology and immunology program, said she is optimistic about a fair union election and points out a union would be good for everyone. “Providing stable working conditions to graduate workers will help them focus only on their research and that will eventually benefit the university," she said.

One other private college has a recognized graduate employee union outside the auspices of the NLRB: New York University. But the NLRB has flip-flopped on allowing grads to unionize, first approving the union by recognizing NYU grad workers in 2000, then reversing the decision in 2004, and finally returning to approval of grad unions in 2016. The current membership of the NLRB under President Trump, however, indicates that any vote on graduate worker unions would fail—which is why graduate employee organizations across multiple international unions, acting in coordination, have abandoned their efforts toward NLRB recognition. Some are contemplating a more direct approach like the one Georgetown grad employees just demonstrated.