Weingarten lauds AFT's past, looks ahead to fall elections

AFT President Randi Weingarten on July 18 delivered a forceful case for Hillary Clinton, while hailing the 100-year-old union as a vehicle empowering our more than 1.6 million workers at the bargaining table and the ballot box. Speaking at the AFT's biennial convention in Minneapolis, Weingarten commemorated the AFT's enduring values and its century of collective action to make the country a more fair and just place, and described the union as a bulwark against public figures such as Donald Trump, Scott Walker and others who exploit Americans' anxieties "and turn scapegoating into an art form."

Speaking before more than 3,000 delegates to the AFT convention, Weingarten described this year's election as "a moment of reckoning for our country," calling the choice that faces voters this fall "a battle for [America's] soul and for our children's future." 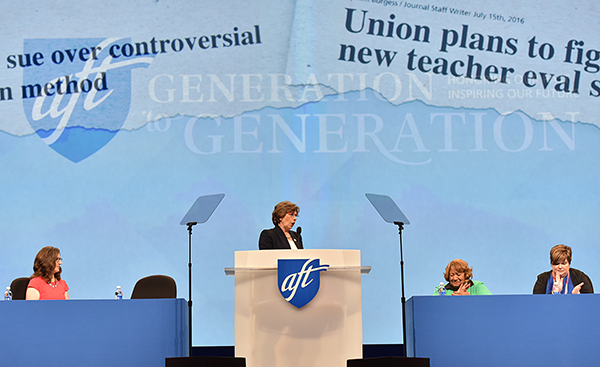 Weingarten tied the achievements of the AFT in its first 100 years to the challenges currently facing our members and other working Americans. Drawing a parallel between today's economic climate and that of AFT's founding years, she mentioned that "in 1916, wealth [in the United States] was the most concentrated on record … until now."

Clinton 'the best candidate for president'
"Hillary understands the most urgent issues confronting our country," Weingarten said. "Her bold economic plan puts unions front and center. She will level the playing field for the middle class, raising incomes for hardworking families, creating debt-free college for students, and lifting children out of poverty."

"She's proved time and time again that she is a dreamer, and a doer," Weingarten continued. "And while I don't think anyone should vote for her just because she's a woman, I know from experience that to achieve what she has is harder because she is a woman. How many of us in this audience have been told you sound shrill, don't yell? You're not smiling enough? That listening is a sign of weakness?"

Trump 'perilously close to fascism'
Contrasting Clinton with presumptive Republican nominee Donald Trump, Weingarten said that "in my lifetime, we've never faced anything like what we're facing this year."

"What do you call it," she asked, "when a candidate for president debases an entire religion, mocks a disabled reporter, refers to women as pigs and calls Mexicans rapists? I call it a threat to civil society, to decency and to the values that underpin our country. Frankly, it is perilously close to fascism."

Weingarten leveled a broad critique against Trump's economic ideas, calling them "snake oil" that "will make economic inequality worse." She blasted Trump for saying "he's against trade deals that would send jobs overseas" but manufacturing his products at "sweatshops in Bangladesh, China and Mexico," and noted that "he bankrupted his businesses four times, and while he boasts he was unscathed, his employees, contractors, and vendors were devastated."

AFT empowers at the bargaining table and at the ballot box
"Our founders couldn't have imagined that their vision would grow from eight locals to 3,500 locals, a union of more than 1.6 million members," Weingarten remarked. She announced the addition of more than 36,000 members to the AFT's ranks since 2014—growth that puts the union at a record-high membership of 1,637,412 workers.

"When unions are strong, we set a standard that helps all workers," Weingarten said. "Union members earn higher wages and are more likely to have pensions and employer-provided health benefits. One of the strongest predictors of how well your children will do economically," she continued, "is the percentage of union members in your community."

Weingarten said it is "not surprising that our right to bargain is in the right-wing's crosshairs. Just remember Friedrichs"—referencing a recent Supreme Court case dealing with union membership—"and how the right tried to use the Supreme Court to decimate us. But bargaining holds the potential to transform and innovate," she said, detailing numerous examples of such innovative contracts.

Union a vehicle for civil and human rights
Weingarten paid tribute in her remarks to Philando Castile, the staff member at J.J. Hill Montessori School in nearby St. Paul who lost his life earlier this July. She decried "the disproportionate use of deadly force against black people," and said that "our justice system needs to be more just." Weingarten spotlighted recent work by the AFT to bring attention to racial isolation and inequality—offering as an example a 2015 report that "confronts institutional racism and offers concrete steps to create excellent public schools for all students, with a focus on boys and men of color."

Lamenting the gun violence that claims 33,000 lives in America per year—violence that took the lives of three police officers in Baton Rouge the day before her address—Weingarten said "we must never accept that mass murders or indiscriminate killings are the new normal." Describing America as "awash in guns," she argued that "working to make the criminal justice system more just and supporting police are not mutually exclusive. This is a matter of ensuring that everyone feels safe—those who swear an oath to protect us and those they are sworn to protect."

In closing her remarks, Weingarten referenced the words of Martin Luther King Jr., saying, "The arc of the moral universe is long, but it bends toward justice." The AFT, she said to the crowd, "is our vehicle in this journey for justice. It was that vehicle in 1916, it is today, and, because of you, it will be in the century ahead."