A tale of two states

In her latest column appearing in the New York Times, AFT President Randi Weingarten looks at how Minnesota and Wisconsin have followed very different economic paths since electing new governors in 2010. 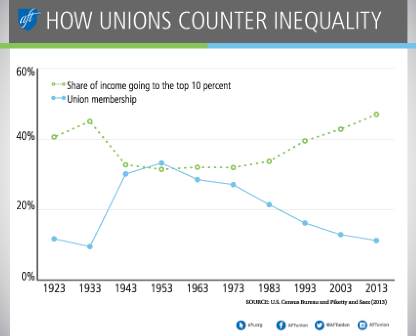 Since his election, Minnesota Gov. Mark Dayton turned his state's budget deficit into a projected surplus of nearly $2 billion, she notes. Wisconsin Gov. Scott Walker, by contrast, has swollen his state's budget deficit to a projected $2 billion. Meanwhile, Dayton has boosted the minimum wage, invested in public education and supported workers' rights. Walker has slashed funding to public schools, and is dismantling the state's public university system. On March 9, he signed a bill that makes Wisconsin the 25th so-called right-to-work state, which, research shows, contrary to the hype, drives down wages and destroys good jobs. Why? All in an effort to eviscerate Wisconsin's labor unions.

"There's a moral to this story," Weingarten writes. "As my high school students taught me, 'You've got to walk the walk, not just talk the talk.' If you want a strong middle class, then you can't take out the unions that built it. If you want good jobs with higher wages, then workers need a voice.

"Trickle-down economics doesn't work, and frankly, it never has. If we want to restore a healthy middle class, we need a different approach, a virtuous cycle that begins with a high-quality public education that gives students the skills they need to get good jobs with fair wages, helping each generation climb the ladder of opportunity. Another crucial step is to enable more workers to form and join unions."